A downloadable VR Experience for Windows and macOS

Created by Martin Schubert with music by Chris Zabriskie


A meditative virtual reality experience for the Leap Motion about inspecting space debris in a weightless environment.


You wake up to the sound of your ship's onboard AI.

You roll over and yawn.

'Good morning, computer,' you mumble into the ship's dark cabin.

'Shall we start the day?'

'Only if we start it right.'

You engage the start up sequence and the soothing sound of Chris Zabriskie's piano fills the metal and plastic space.

Light reflecting off a nearby planet pours into the cabin revealing the space you call home.

You put out your arms and push off gently towards the center console.

A new collection of debris to inspect.

A new set of artifacts to discover.

Watch this short 'How To' video to get the best tracking out of your Leap make sure your audio is on!

Best experienced sitting on a swivel chair or standing up (be careful and clear space!).

Mac build is untested (please comment if you try it!)

Thank you to the Leap Motion team for running the 3D Jam and answering all my emails. It was a lot of fun making Weightless and I plan to continue developing it.

And thanks to anyone that gave it a try!

If you're getting a black screen on start up but see the details box when you hit space, try launching it with the parameter -force-opengl

Or try setting your desktop resolution to 1280x800

Or you can try downloading the [Non-DirectX 11] version below. 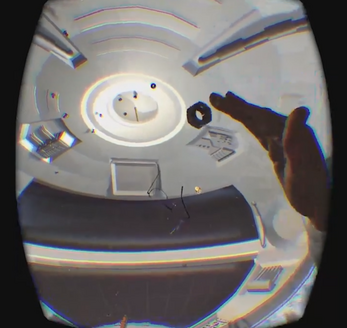 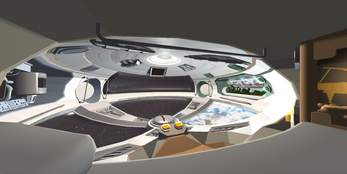